The city of Agadir in Morocco is the first seaside resort of the Kingdom. Its mild climate in winter, and temperate in summer is also very popular with Moroccan and foreign holidaymakers. Agadir is probably the city that enjoys the most pleasant climate of Morocco.

Agadir is a Berber-speaking city in southwestern Morocco, located on the Atlantic coast, in the Sous region, 508 km south of Casablanca, 173 km south of Essaouira and 235 km west of Marrakech. Agadir is the capital of the Sous-Massa administrative region and the Agadir prefecture Ida-U-Tanan.

According to the 2014 census, Agadir had 421,844 inhabitants that year, and the population of the Agadir Ida-Outanane prefecture was 600,599. Two languages ​​are spoken by the local population of the city: Berber-Tachelhit and Darija.

Ravaged by an earthquake in 1960, the city was completely rebuilt according to mandatory seismic standards. It is now the largest resort in Morocco with exceptionally mild climate throughout the year. Since 2010, well served by flights "low cost" and the highway to Tangier, the city attracts all walks of life and knows an annual growth of more than 6% per year in demand for housing.

Agadir was the first sardine port in the world in the 1980s, and has a famous beach stretching over 10 km with one of the most beautiful waterfront walks in the region. Its climate offers 340 days of sunshine a year and allows swimming in all seasons. The winter is exceptionally mild and the heat of the summer never stifling (summer haze is not uncommon).

Agadir is the first tourist pole of the country, place sometimes disputed by Marrakech, and the first fishing port of Morocco. Commercial activity is also booming with the export of citrus fruits and vegetables produced in the fertile Souss Valley.

With its white buildings, wide boulevards, modern hotels and European-style cafes, Agadir is no longer a typical city of traditional Morocco, but a seaside tourist city.

Vast and dynamic, the city center encompasses the boulevards Mohammed V and Hassan II, the Valley of the Birds, the avenues of General Kettani, Mohammed VI, Moulay Abdellah and Mokhtar Soussi and the great avenue of FAR (Royal Armed Forces). It also includes the Salam Square, the Plaza de la Espérance and the Loubnane Mosque, as well as the Place des deux fontaines, which leads to the large green theater of the municipality.

The bay of Agadir is a member of the Club of the most beautiful bays in the world. Lively and dynamic, the seaside tourist sector consists of the Boulevard du 20 août, Avenue Tawada, Boulevard de la Corniche, Avenue de l'oued Souss, and the Founty district. It has many hotels, restaurants, modern cafes, and a residential area of ​​villas. A vast project of embellishment of the city is being finished. Agadir thus has a beautiful promenade on the seafront for about 5 kilometers. A recent marina with many luxury shops has been built at the foot of the Kasbah.

The city is served by Agadir-Al Massira airport.

Closest places to the residence : 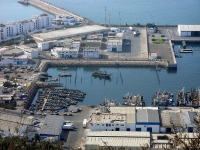 Our apartments are located in the city center of Agadir, Avenue Hassan II. This large avenue is particularly busy the week, and is home to many shops (snacks, restaurants, cafes, supermarkets, banks, clinics, foreign exchange agencies, pharmacies, car rental ...)

The beach of Agadir and its famous tourist area with its many cafes, bars, restaurants, discotheques, is only 15 minutes walk from the residence.